This is a tsuba signed “Masamitsu, residing in Shinshu,” which was manufactured in the latter part of the Edo period and reproduced this year by our CEO, Takahashi Masaki. This reproduced tsuba was displayed at the Society for Preservation of Japanese Art Swords’ exhibition of newly made swords.

This is an octagonal tsuba that is refined and presents a feminine elegance. In ancient Japan, the number eight was auspicious and regarded as a “sacred number”. It was also considered to be a well-balanced and steady shape that represented all directions (as in fortunetelling). The exquisite Mokume Gane pattern stretches out over one side of the elegant octagonal tsuba. It is as though fine and intricate lines had been drawn on the red base of copper, in a marbling effect. The black part is in shakudo (an alloy of copper and gold) and the Mokume-Gane was achieved by using a chisel to carve out the multilayered surface of copper and shakudo. Since the shakudo used in the layering was quite a bit thinner than the copper, the final effect once it had been flattened was that of fine marbling (suminagashi).

This effect can be seen in the Sanjyurokuninshu scrolls in which are compiled “waka” poems by The Thirty Six Immortals of Poetry of Japan, where various decorative patterns act like supporting players to the waka itself. Marbling is one of the decorative methods, such as stringing together washi Japanese paper of slightly different colors in a method known as “tsugikami,” producing a beautiful artistic effect with rice paper made by watermarking beautiful patterns, or decorations made using gold leaf. This is a technique in which absolutely unique results are achieved by adding drops of ink to water and transferring the patterns that are formed to rice paper. Possibly, these patterns are also meant to convey the ever-changing pattern of clouds in the sky. 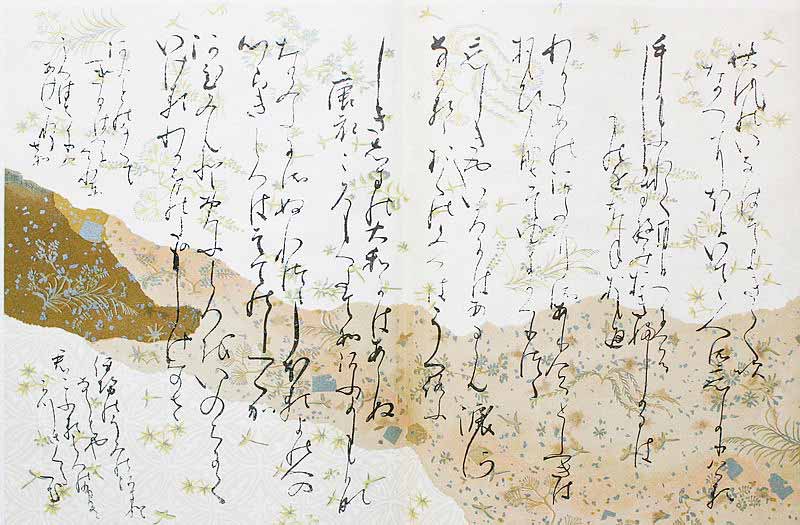 The technique of Mokume-Gane is similar. Didn’t the maker of this tsuba feel the similarities of these characteristics as he created a pattern using randomness? When it is fitted to the sword, the pattern is not visible at first glance. But the more closely you look at it, this strangely fascinating Mokume Gane tsuba draws you in to its boundless intricacy and exquisiteness.