In the previous chapter, we introduced Shôami Denbei who created the concept of mokume-gane, and his gorgeous mokume-gane work. In this chapter, we would like to tell you about “guribori” which is linked to the advent of mokume-nane techniques.

It is said that mokume-gane techniques originated in the early Edo period, in the guribori tsuba created by Shôami Denbei. In guribori, different colored metals such as copper and shakudo are stacked alternately and fused, then arabesques and spirals are carved in so that the metal layering design is visible in the carved parts. There is a theory that this may have been influenced by the folk patterns of the Ainu, but it is generally believed that the roots lie in the Chinese lacquered “Guri.” This chapter will be devoted to “guri.” 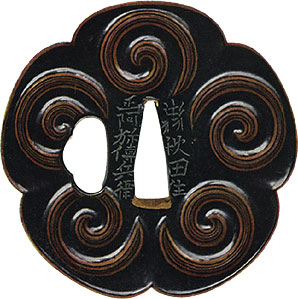 The technique of applying the sap of the Japanese sumac tree to utensils is known as lacquering. Guri is one of the ancient lacquer techniques of China. Nowadays, most people are familiar with the likes of Wajima lacquer or Tsugaru lacquer, with tableware or gold makie works of art. Coating wooden utensils with lacquer makes them resistant and long-lasting. In ancient China, it was common to coat multiple layers of lacquer onto wooden items to achieve considerable thickness, and then carve this into three-dimensional patterns. These swirling patterns that looked like continuous warabi bracken were called guri. The arabesque patterns which had spread around the world since ancient times were further refined with abstract heart or swirl patterns appearing. Through the Kamakura and Muromachi periods, this Chinese lacquer came to Japan at the same time as Zen Buddhism, and was prized for use in tea utensils or incense containers. In Japan, the swirl patterns were called “kurikuri” which is how it came to be known as guri. The sound came to depict the pattern. 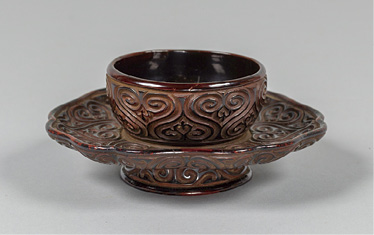 Subsequently, this was imitated in Japan to carve designs on wood and apply lacquer to make Buddhist altar objects, becoming the origin of Kamakura-bori. There are masterpieces among Japanese made lacquer inro from the latter part of the Edo period believed to be of similar origin, showing us that such patterns circulated widely at the time. 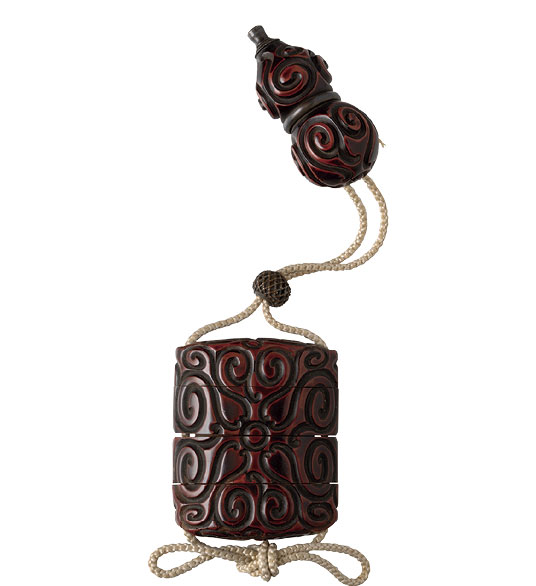 And going further back in China, it is said that the technique known as ”Saihi” which was mostly seen during the Southern Song dynasty is at the origin of guri. In this, yellow and orange coatings were applied alternately, with the final surface layer being black, and, as geometrical patterns were carved out, delicate layers of colored lacquer became visible. There are only a very few pieces still in existence. Both the Tokyo National Museum and the University Art Museum of the Tokyo University of the Arts have several pieces in their collections.

So, please take another look at the guribori tsuba made by Shôami Denbei. There is no doubt that the swirly pattern carved into the metal layers resembles the guri technique. And the reason why Denbei’s guribori is called the ancestor of mokume-gane lies in the similarity of the technique in carving down the layered metal. The greatest characteristic of the guribori of the Akita Shôami school, which started with Shôami Denbei, is its full three-dimensional effect. The carving is bold but there is refinement within the scale and massiveness giving it the characteristics of being an ancestor. It is also well-rounded, giving an impression of the same level of outstanding technique seen in the Southern Song dynasty incense containers 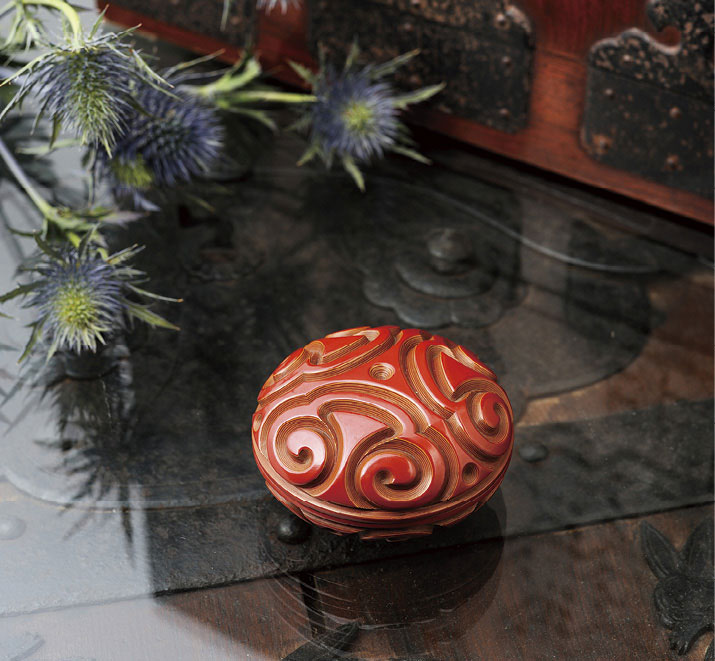 Shôami Denbei further developed this guribori technique and created the mokume-gane technique that produces the gorgeous patterns such as those we described in the previous issue. He was able to produce intricate patterns by carving and twisting the layered metal billets and then pounding them down with a hammer.

Further advances in guribori technique were not immediate and happened in the latter part of the Edo period. Takahashi Masatsugu who was a craftsman specializing in sword tsuba was active during the Bunka and Bunsei eras (1804-1829), and left elegant and refined guribori pieces for posterity. Subsequently Masatsugu’s adopted son, Takahashi Okitsugu, specialized in guribori and mokume-gane. Looking at the magnificent existing sword fittings by the Takahashi school, starting with Masatsugu and Okitsugu, it seems appropriate to say that this was the pinnacle of guribori and mokume-gane techniques. 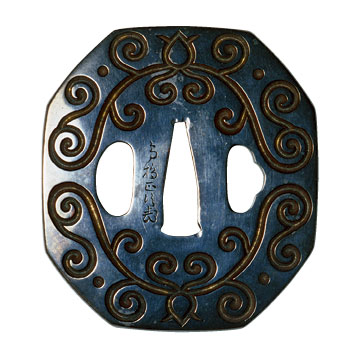 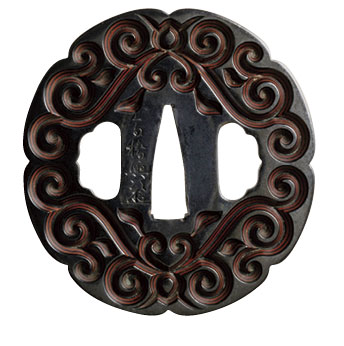 At Mokumeganeya, we have adapted the technique of guribori, with its long history, to modern times, and are putting our all into producing wedding rings that our customers can wear forever. 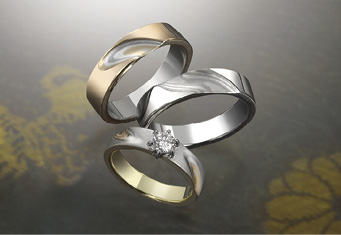