The mid-autumn harvest moon this year was on September 13. We hope you were able to admire it. One of the traditional images of the moon in Japan shows a rabbit pounding mochi, and this has, since ancient times, often been used as an image in the world of Japanese crafts. One of these images does not depict the moon itself but combines the rabbit with other designs to create a perception of the moon.

Scouring Brush (Tokusa) Rreeds and Rabbits
Rabbits by some scouring brush reeds. Starting in the 18th century, there were many cases of works depicting this particular combination. 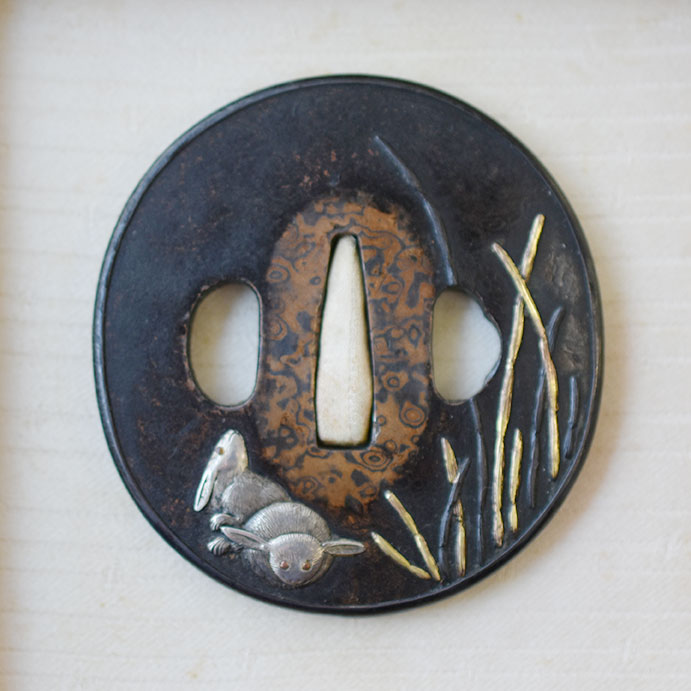 It is said that the origin lies in Zeami’s Noh song “Tokusa”: “The autumn moon, as if brightly polished, shines through the trees of Mt. Sonohara, where the scouring brush reeds are harvested.” When this song is depicted in a art, the fact of painting an image of a rabbit, which is associated with the “brightly polished moon”, that is to say the full moon, enables the artist to hint at the moon without actually showing it.

In this Mokume Gane tsuba, which is part of Mokumeganeya’s collection, are depicted Tokusa reeds and rabbits looking upward. At first glance, it looks like the only use of an intricate Mokume Gane pattern is in the portion around the hole and which therefore cannot be seen once the blade is fitted. But in fact, the entire tsuba is made from bicolored Mokume Gane, combining copper and Shakudo. The surface finish is black, representing the darkness of night. But depending on the angle at which one shines a light on it, the underlying Mokume Gane pattern becomes slightly visible. It is likely that the craftsman who made the tsuba used this technique to hint at the surroundings in the moonlight rather than convey total darkness. Beyond the rabbits looking up at the moon, the moon itself was doubtless shining brightly. Mokume Gane comes into play to depict the background, rather than just show a simple pattern.

The quality of the metalwork in a tsuba that is less than 7cm in diameter is extremely fine. In this piece, the Mokume Gane technique, while being secondary, plays a major role in depicting the subject.

Finally, we would like to introduce the ukiyo-e print of “Rabbits and Reeds in the Moonlight” by Utagawa Hiroshige which is in the collection of the Tokyo National Museum. In this case, the full moon is depicted, with the rabbits looking up at it.. It is interesting to compare this image to that of the tsuba.