In the last chapter, we told you about Shôami Denbei who made the kozuka which is acknowledged to be the oldest and most beautiful example of Mokume-Gane. The CEO of Mokumeganeya, Takahashi Masaki, made a reproduction study of this Mokume Gane kozuka signed Shôami Denbei, made of gold, silver and other metals, and an Akita Prefecture designated cultural property, in 2003 in order to elucidate this outstanding design that was particular to Shôami Denbei and not seen elsewhere. We will give an overview of this project here. This represented the first such study of the design techniques of Edo period Mokume Gane. Below is an excerpt from the study thesis.

The first step was to enlarge a photograph of the Kozuka knife and trace the pattern in order to  find out how many types of metal has been used and how they had been stacked. Within the detail of the pattern, the intricate changes in the materials, reminiscent of the fine contour lines on a map, are laid out within a framework of as little as one millimeter square. The technique of Mokume Gane consists of first carving down a metal stack, or billet, using tools such as a chisel, and then creating the pattern by using a hammer  to forge it flat. By using this process, the order of the metal layers remains the same whichever portion is extracted to reveal the pattern on the surface. 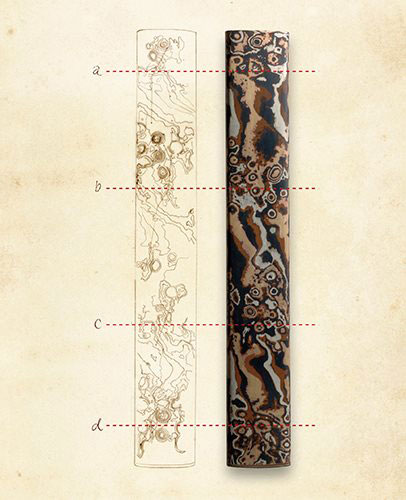 It became clear, as a result of the observation, that the order of the layers was reversed at the boundary between the A portion and the B (copper) portion of the pattern. Comparing the trace drawing to the contour lines showed that this was not a simple reversal in the order of the layers, and that the metal layer before and after the displayed “copper” was the same layer. This led to the thinking that, before creating the pattern, some sort of particular process was used so as to reverse the order of the layering in part. Further observation of the C portion confirmed that the layers were reversed with (c) as a boundary and that, furthermore, these were in the same order of layering as the A portion.

The results of the analysis show that after fours counts of twisting of the surface, the back, the surface and the back, the billet was then flattened using a hammer. It is through this process that the twisted pattern that is at the origin of Shoami Denbei’s unique Mokume Gane pattern came up to the surface.

The actual reproduction study was done based on the results of this analysis.

1. Following verification by tracing the pattern, 6 sheets of copper, 5 sheets of Shakudô, 3 sheets of gold and 2 sheets of silver were prepared. 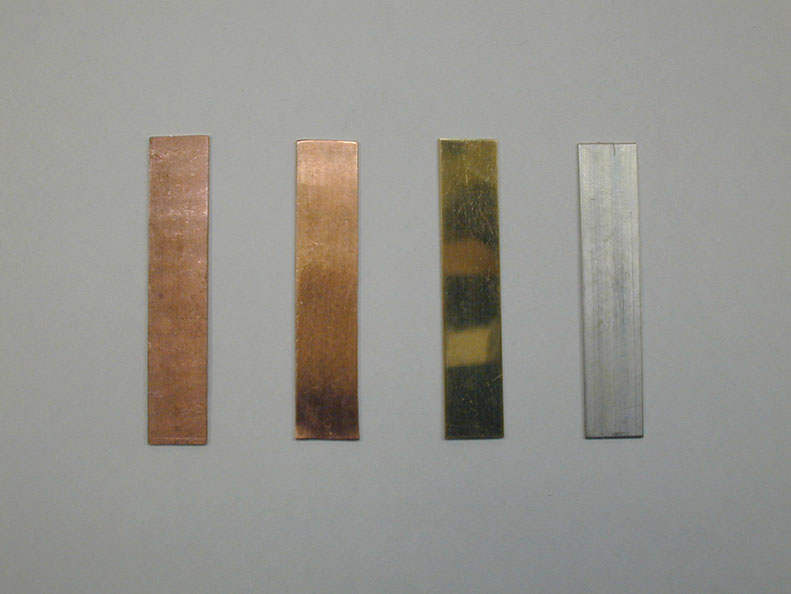 2.  The sheets were stacked in order and heated, becoming fused. They were then hammered down in order to produce a rectangular billet. 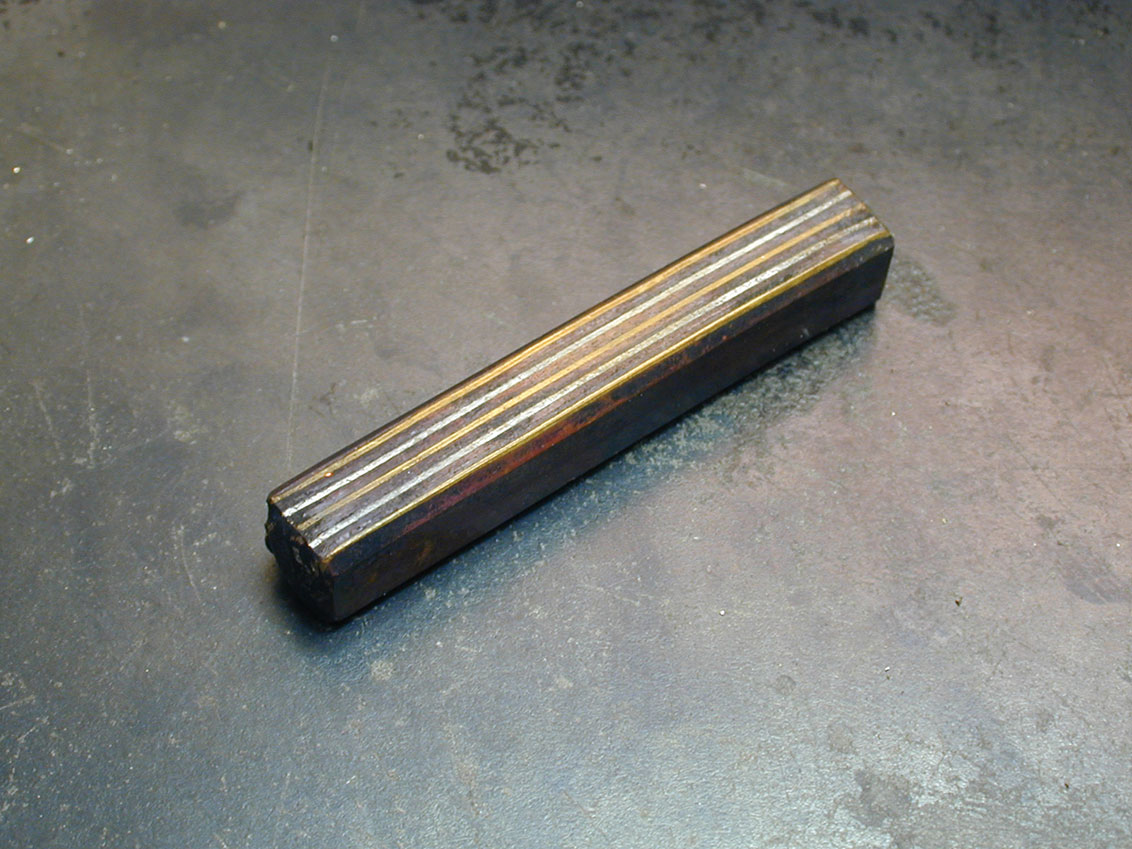 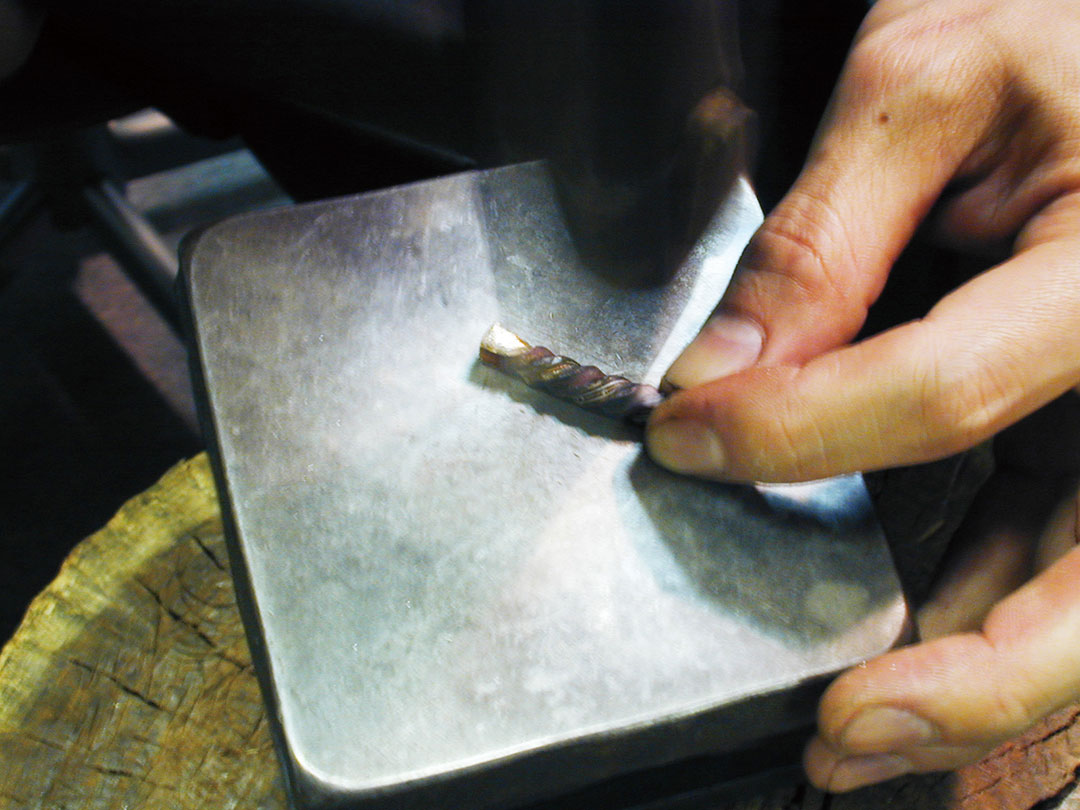 4.The billet that had undergone twist processing was then repeatedly carved and hammered down until it was flat, and the pattern was revealed. 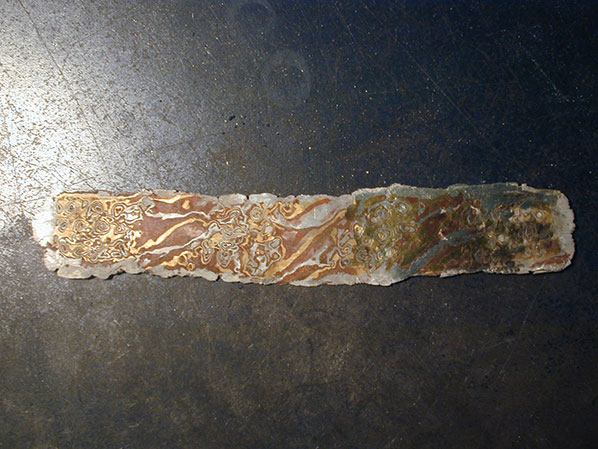 The end of the reproduction study

The thing that very much came to mind at the end of  the reproduction study is that these unique patterns are at the root of the original Mokume Gane technique. The point is that this way of revealing patterns goes beyond “something that is produced randomly.” It is the solid manifestation of the culmination  of a very refined technique by Shoami Denbei who turned the random into the natural.

Even the patterns that are graceful and fresh at first glance require in their making minute attention and careful work. The reproduction made it possible to experience how the details of the idea that started as a glimmer in the creator’s eye became feasible as a pattern. The insatiable quest of Shoami Denbei for the possibilities in Mokume Gane techniques was clearly felt.