The technique of Mokume-Gane came from the techniques for manufacturing tsuba (sword guards).

From the time when swords were used as weapons, through the peaceful world of the Edo period, there was a strong inclination for sword accessories to be seen by warriors as an expression of themselves and of their individuality. This is how highly decorative tsuba came to be made, and the intricate patterns made from Mokume Gane came to be used.

The very shape of tsuba depended on the taste of its owner. In olden times, people did not just pick a shape as a simple design, but rather were moved by the belief that certain shapes were auspicious for them. We will introduce here Mokume Gane tsuba and the meaning of their shapes.

“Marugata” round-shaped
This is the shape that is most often used in tsuba. As the circular shape signifies “completion” or a “lack of angles,” its positive meaning is liked by many. 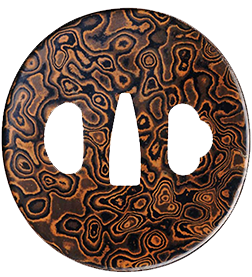 “Mokkôgata” lobed (quince)-shaped
The name comes from a resemblance with the cross-section of a quince. The appeal of the quince comes from it giving a great deal of fruit, and since it also resembles a bird’s nest, it has long been appreciated for its connotations of a prosperous progeny. It comes in four, five and six segment variants. 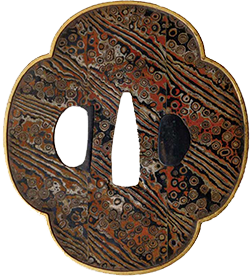 “Aorigata” saddle-flap shaped
The “aori” were leather pieces that would hang down from a horse’s saddle to offer protection from mud. This was a shape that was familiar to warriors and that is why it was used as a tsuba shape. It is a solid shape, with the lower part being somewhat wider than the upper part. 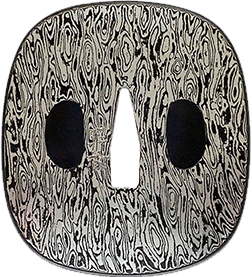 “Gunbaigata” Military fan-shaped
Long been believed to ward off demons and call down mysterious powers, the fan shape has also been used in Shinto rituals. In addition, it is said to be an auspicious shape that shows the right direction to move forward, just like brandishing the military fan led the way to victory. 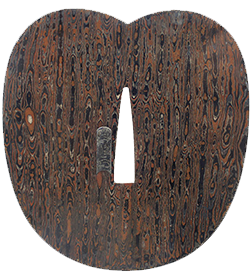 “Kikubanagata” chrysanthemum flower-shaped
Since the Edo period, September 9th has been designated “Chôyô no Sekku” or Chrysanthemum Festival, in which chrysanthemum sake is drunk while praying for long life. For the Japanese, the chrysanthemum is a very familiar flower with good connotations. 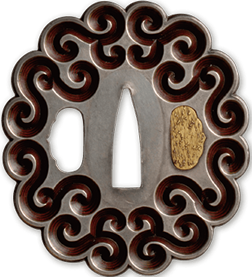 “Hakkaku” octagonal-shaped
In ancient Japan, 8 was considered a “sacred number” that was very auspicious. It is also a stable and well-balanced shape that incorporates all 8 directions used in divination. 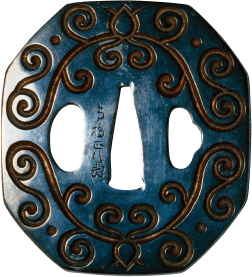 There are also various other shapes of tsuba, and all of them are said to be auspicious, and one can imagine how important it was for ancient people to wear them on their person.

At Mokumeganeya, we consider ourselves the heirs of those ancient people and their wishes and so produce “tsuba jewelry” using the popular “Yottsumokkôgata” shape handed down from the Edo period.