In the first part of this chapter, we talked about the connection between Mokumeganeya president TAKAHASHI Masaki and the tsuba by TAKAHASHI Okitsugu which is at the Boston Museum of Fine arts. On returning to Japan after studying the Yoshino River tsuba which had traveled all the way to that museum, TAKAHASHI Masaki decided to make a reproduction of it. This chapter will introduce this reproduction process.

The greatest characteristic of both the Yoshino River and Tatsuta River tsuba is their totally unique concrete representation of cherry blossom flowers and red maple leaves using Mokume Gane. In Mokume Gane, tools such as “Tagane” chisels are used to carve the multi-layered material, with the designs being produced by obtaining color through a hammering process in which lower metal layers are brought to the surface. It is therefore close to impossible to set and obtain pre-defined patterns with this process, and earlier studies have clearly shown that carving is used for pre-defined patterns. This particular reproduction undertaking aimed to further these studies.

It was possible through observation of the tsuba to determine which metals had been used as well as the layering. A detailed look at the pattern also gave indications as to the manufacturing process. Based on this information, the reproduction proceeded as described below. 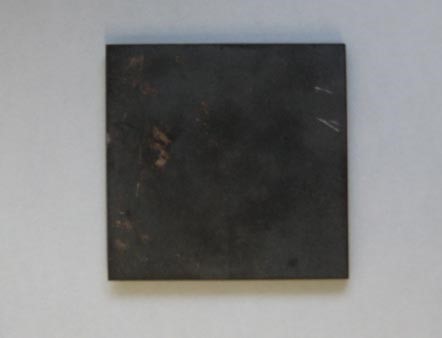 2. After forging the layered base metals, they went through a rolling process. 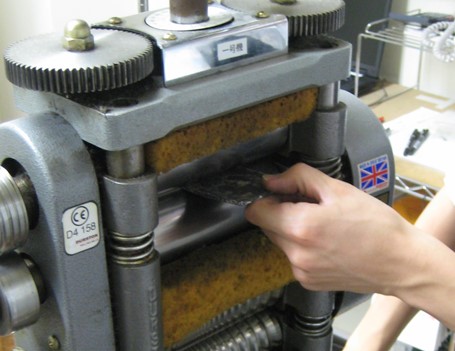 3. Three sheets of the base metal produced as described above were used and forged together. 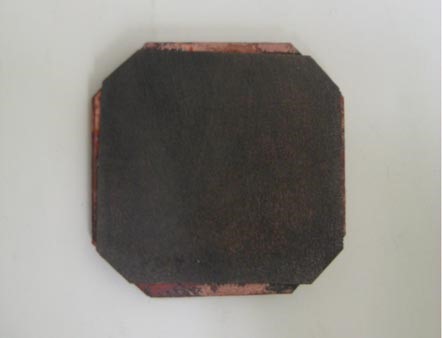 4. The pattern of blossoms was carved out using a Sakura (cherry-blossom shaped) chisel and an elliptical chisel. 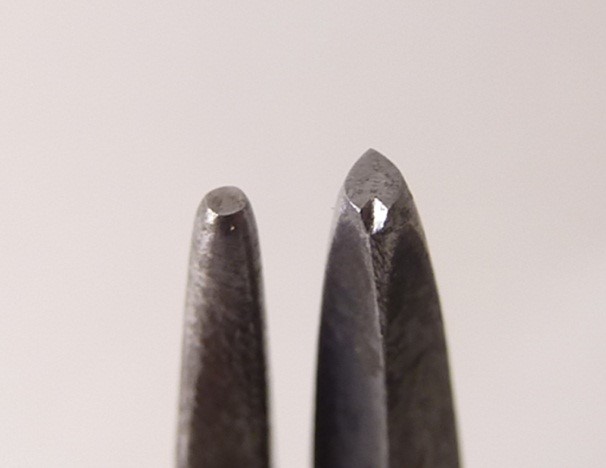 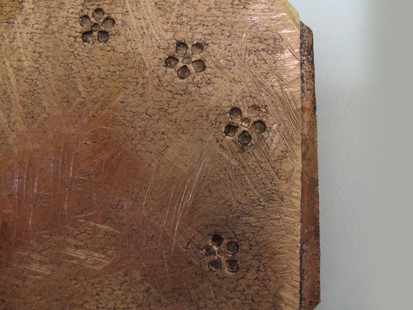 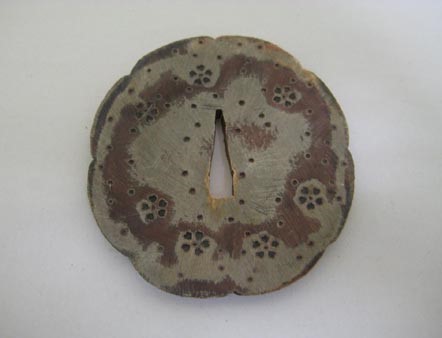 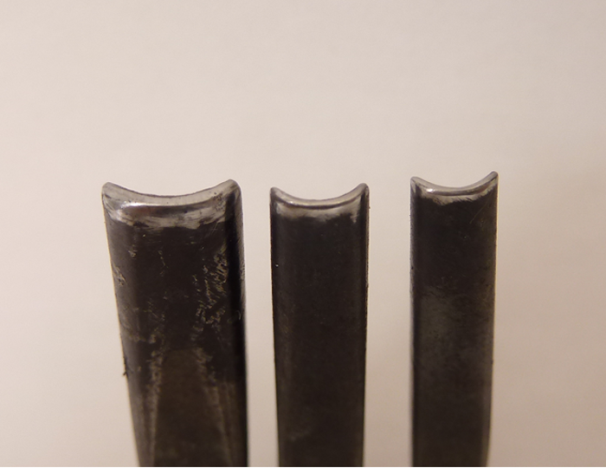 8. The surface was filed down with a rasp to bring out the pattern. 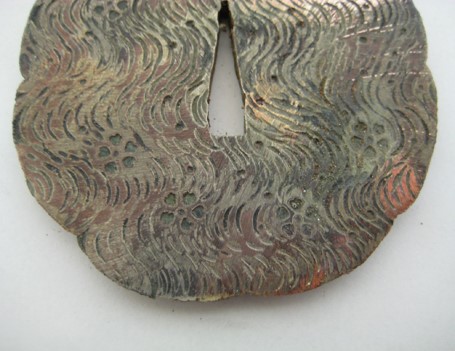 9. The Mokume Gane variegations were added. 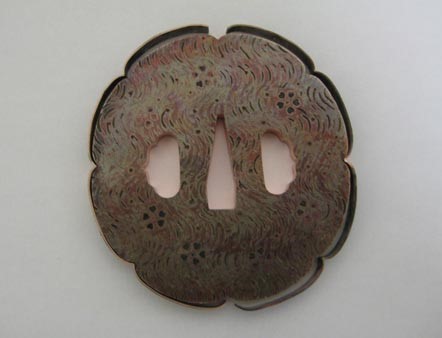 10. The signature was engraved. 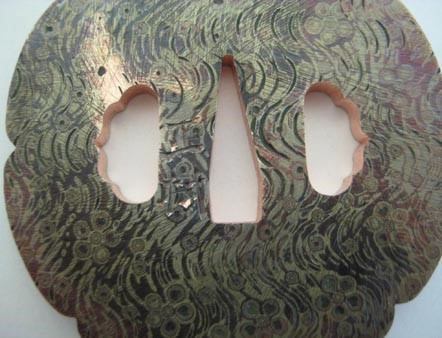 These two tsuba by TAKAHASHI Okitsugu represent not just a “technique to make a pattern” but are works that lifted up the process to representing images. By decorating the entire surface of the tsuba with Mokume Gane waves, it became possible to reproduce the eternal flow of the river stretching out to infinity. They are outstanding works through which he sublimated the technique by producing a design that could only be manifested through Mokume Gane.

There is a detailed explanation regarding the process used in this reproduction study in TAKAHASHI Masaki’s doctoral thesis on “The Decorative Interpretation Possibilities in Mokume Gane Jewelry.”

Please find below an abstract of the relevant parts of the thesis. For further details, please refer to the thesis itself (Japanese only).

From times of old, the cherry blossoms on the Yoshino River and the red maple leaves on the Tatsuta River have been favorite topics that have been written about in classics such as the “Manyoshu”, “Kokin Wakashu” and “Shin Kokin Wakashu.”At some stage, these beautiful landscapes transcended reality and leapt into the world of images. What Okitsugu wanted to convey of these landscapes within his tsuba was the “fusion of expression and technique,” taking Mokume Gane into totally new frontiers with these works. Despite the complications entailed in the 8-sided shape, he carefully applied the same material to the totality of the surface, even including the interior of the hitsuana, and by covering the entire tsuba with the design of the flow of the river, he succeeded in making anyone looking at it see the infinity of the river’s flow within the tiny confines of a tsuba.

The pattern was produced using Mokume Gane that was made of shibuichi and two kinds of shakudo. The streamline shape that represents the flowing water covers the entire surface and, and the works are beautifully balanced with the cheryy blossoms on the Yoshino River tsuba and the red maple leaves on the Tatsuta River tsuba (Plate 15). In addition, the speckling in the pattern gives variations in the river flow design and, as a result, the flow of the river seems to change and has great depth. And then, on the inside of the hitsuana, the variegations that cover the entire surface turn into a different, simpler Mokume Gane than the remainder of the surface. The number of layers was deduced as a result of observations of the surface. If one looks closely, there are several places where one can perceive the cross-section of the layering, such the brim of the hitsuana and the brim of the variegations. And from the structure of the variegations applied to the inside edge of the hitsuana, the cross section of the layering is exposed, and it was possible to see the structure of the layering. The pattern of the Mokume Gane variegation in the front and back of the tsuba and on the inside of the hitsuana is different, but making assumptions based on observation of the front surface pattern, and taking into consideration the fact that it might be unavoidable to use different materials, the conclusion was that the same materials were used in the same number of layers. It was possible to ascertain, from close observation of the way the materials are revealed in the pattern, the order of the manufacturing process. Both the cherry blossoms in the Yoshino River tsuba and the red maple leaves in the Tatsuta River tsuba, are made of just shakudo, and a layering is revealed that seems to surround the shapes of the cherry blossoms and red maple leaves, so that they seem to blend into the surrounding flow of water. From this effect, it was concluded that the cherry blossoms and red maple leaves were carved first with a chisel, followed by the creation of the flowing water. As the same effect can be seen in the speckled pattern, it could be ascertained that the cherry blossom design and the Tatsuta river design were elaborated at the same time.

The greatest characteristic of these two tsuba is the concrete representation of the cherry blossoms and the red maple leaves, which is absolutely unique in the world of Mokume Gane. Basically, Mokume Gane consists of carving the layered materials using chisels or other tools, with a forging process to create a pattern by bringing out the colors of the layers that are underneath. Creating concrete patterns using this process requires great skill in technique, and it is fair to say that making a pattern of complex set designs is close to impossible. However, the author previously proved it by engraving, as reported in the results of the test that was carried out as part of the research report in his book “The Mokume Gane Textbook.” That study was meant to further research on the process of making Mokume Gane, presenting the challenge of reproducing the entire tsuba. Examination showed that that it was a three-layered structure, and in order to gain the full benefits in reproducing the details of the design by engraving, the work was done after the three layers were fused. First, the figurative blossoms were engraved on the fused layers, followed by the circular patterns, and then the patterns that reproduced the flow of the river, in order. This is because if you start by carving the background flowing pattern, it will have an influence on the figurative patterns. The pattern appears as a result of carefully carving out the metal to the level of the indentation. The final step is to wind the same material around the rim and the hitsuana, so that it was possible to experience how, with the entire surface totally covered in Mokume Gane, an image of the flow of a large river could be obtained within the tiny world of a tsuba.

The Results of the Reproduction Study

The Mokume Gane Yoshino River tsuba, made by and signed with TAKAHASHI Okitsugu’s seal, is an outstanding piece within the world of sword fittings made with Mokume Gane techniques, in its combination of technical skill and sensibility. It is the embodiment of a Mokume Gane that went beyond just a technique to make patterns, to a technique to reproduce images. What needs to be emphasized is the elaborateness of creating this design. He was successful in depicting the endless flow of the river on a vast scale with a pattern of waves, imaging and designing an infinite expanse using Mokume Gane that covers the entire surface of the tsuba. In this is depicted the majesty of nature, not by achieving a pattern out of a simple figure, but through the spatial effect of the minute gaps in the metal layers that make Mokume Gane what it is, plus the energy of the material experienced by condensing the density of time. It is no exaggeration to say that, in fact, these scenes can be depicted as such because of Mokume Gane. The condensing of time and energy within the manufacturing process is totally in tune with the themes that are depicted, such as the passing of time and the dignity of nature, and tie in to the inevitability of technique and image. TAKAHASHI Okitsugu’s Yoshino River tsuba (signed TAKAHASHI Okitsugu) is a magnificent example of the realization and surpassing of the technique in a design that could only be realized with Mokume Gane.