In the Mokume Gane Textbook that was edited by our president, Masaki TAKAHASHI, there are also some works of MOKUME GANE made by overseas artists.

James Binnion is one of those artists. He has been studying Mokume Gane independently in the United States for over 30 years.

He was featured in a recent TV program entitled “Sekai! Nippon Yukitai Jin Oendan” (The World! Cheering on those who want to go to Japan!), and the Japan Mokumegane Research Institute, of which Masaki TAKAHASHI is director, fully cooperated with the recording. On the day of the recording, the cherry blossoms were in full bloom under a perfect blue sky. Mr. Binnion, who was visiting Japan for the second time, and his wife,  were impressed by the beauty of Japan’s nature. 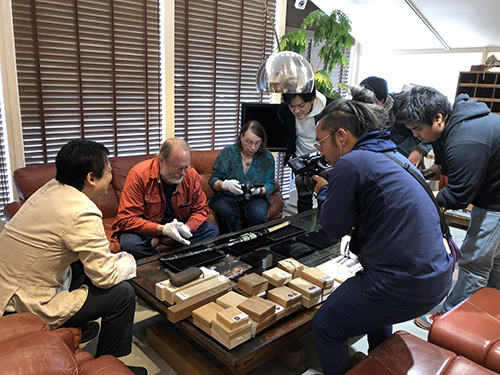 Mr. Binnion had only ever seen one original example of Mokume Gane, the products that had been born of the techniques of the Edo period, and that was the Yoshino River Tsuba at the Boston Museum of Fine Arts. He was able to see many Mokume Gane pieces during this visit and so enjoyed his trip to Japan a great deal.

On the day of the recording, the first item to be introduced was a sword with Mokume Gane fittings which he picked up and examined with great interest, and he even held it to his side in Samurai fashion. 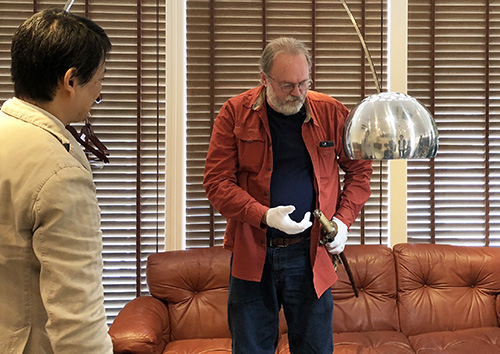 The piece itself is extremely rare in that the elements such as the fuchi, kashira, kawaragane and kojiri are made of the same Mokume Gane pattern and have been preserved along with the sword’s sheath. Also, the tsuba dates from the latter part of the Edo period and is signed Shoami Morikuni, residing in Matuyama, Iyo province, made of Bombay Black Wood (Tagayasan). It is an unusual four square pattern Mokume Gane. 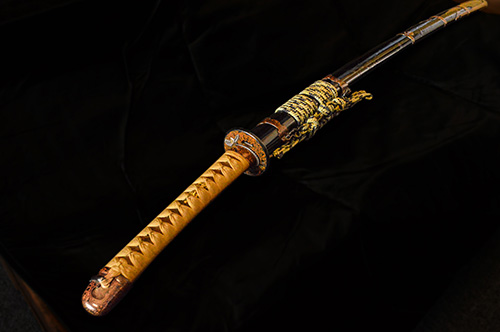 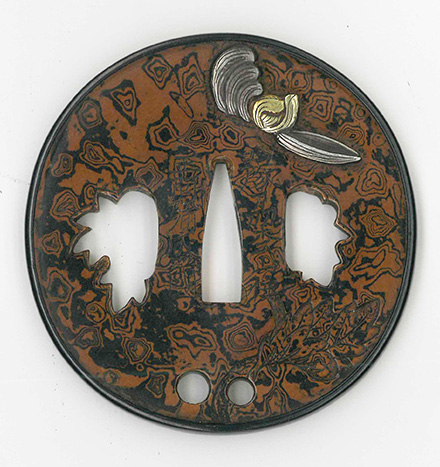 Takahashi went through the history of Mokume gane, starting with the guribori works which were at the origin of Mokume gane and going through to Edo period pieces.

The pieces viewed were not just tsuba, but included items such as yatate and  kettles, and both Binnion and Takahashi, as Mokume Gane artists themselves, marveled at the skill of these craftsmen, and both felt the scale of the challenge in pursuing these techniques. 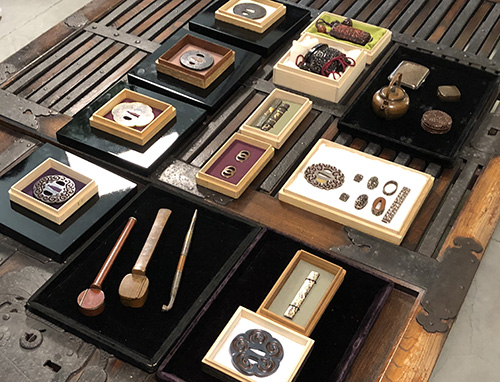 The difficulty in bonding stacks of different metals and then, after the further process of creating the pattern, the great skill required to form a three-dimensional object. On seeing for himself a variety of Edo period pieces with different patterns, Binnion was able to get something of a feel for the creative process of people in ancient times. Mr. Binnion has devoted most of his life to producing Mokume Gane. After seeing part of the collection on this visit, he was delighted and expressed the intention of coming for a return visit. 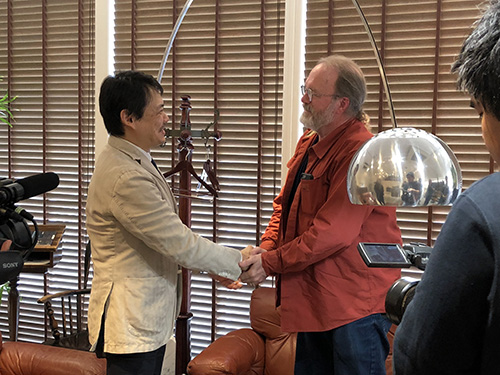 On the same day, there was also a separate filming of collection items, with detailed close-ups of Mokume Gane patterns which was most interesting, as the actual images doubtless will be. Please make sure to catch it on television.

The program was aired on Monday, April 23, on TV Tokyo group channels.

The website for the program (Japanese only) is at:  http///www.tv-tokyo.co.jp/nipponikitaihito/ 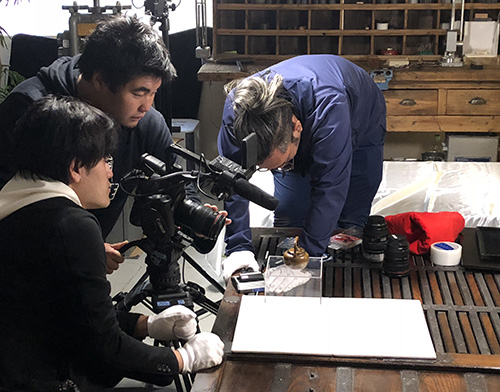