From the end of the Bakufu period into the Meiji Era, the foreigners who visited Japan were fascinated by Japanese art and brought many objects back home with them. Many of these were later donated to museums. Mokume  Gane pieces are also in the collections of many museums worldwide. Chapters 10 to 13 featured the items in the collections of the British Museum in London and the Ashmolean Museum, the museum of the University of Oxford.

This chapter will feature the Mokume Gane pieces in the collection of the Victoria and Albert Museum (V&A) in London. Mokumeganeya has published “ Textbook of Mokume Gane” through its NPO, the Japan Mokumegane Research Institute.

The publication is a textbook which systematically addresses the history, culture, works, and techniques of the traditional art of Mokume Gane. Many pieces that are featured in the collections of museums overseas, such as the V&A, are included. The opportunity on this visit to see these pieces with our own eyes was a great joy!

The V&A was founded in 1851, the same year as the Great Exhibition was held in London, and the museum opened its doors in 1852, as a museum of decorative arts and design, featuring a collection spanning 5000 years of human creativity from all over the world. Its current palatial home was completed in 1909. 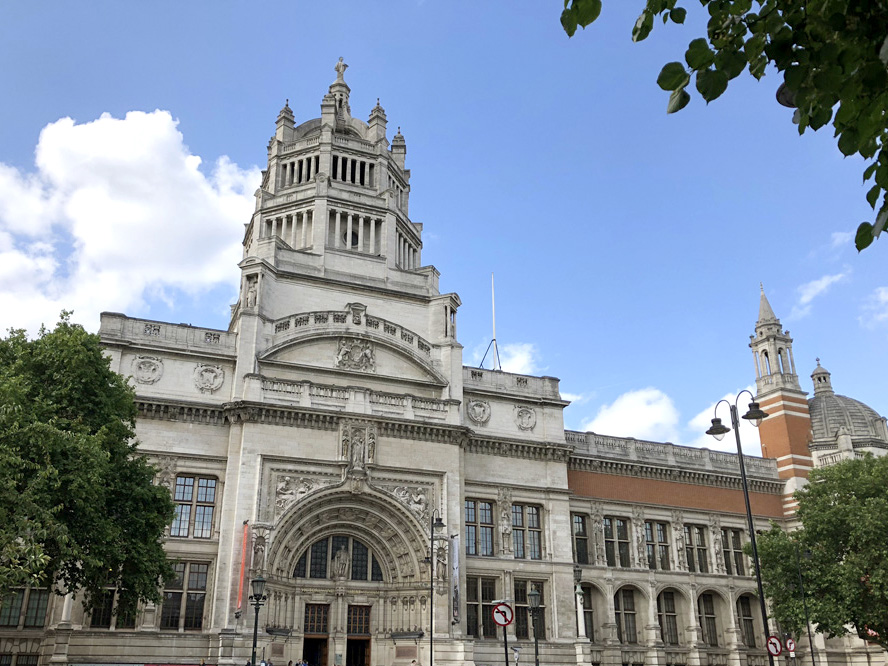 The main entrance of the V&A

The museum’s exhibits cover more than 140 rooms, and it is considered to be world-leading in the quality of its collections and their depth. Just like the British Museum, entrance is free. The inner courtyard which is surrounded by majestic buildings offers a space for relaxation where children can enjoy water games.

The design of the exhibition spaces differs according to the contents. Silver items, for example, are displayed in a palace-like setting.

In addition to the exhibition spaces in which gorgeous ornaments from Europe’s medieval period are elegantly displayed, the display areas themselves are to be enjoyed.

In the “Japan” exhibition space, the design takes into account Japanese architecture, with the display cases featuring Japanese “Ranma” transoms.

Inside view of Japan room

The lighting in the Japan room is particularly soft, partly to preserve the pieces on show, but also perhaps to show how Japan prizes the beauty of shadows. The exhibit includes displays ranging from the Edo period and Meiji era to modern times, presented in various categories including “tea ceremony”, “lacquer” and “ornaments”

On taking a closer look, there it was, somewhere in the middle! The guribori tsuba signed Takahashi Okitsugu! And there was also a Mokume Gane tsuba.

We have a similar tsuba to the guribori tsuba made by Okitsugu, but in Mokume Gane, in the collection of the Mokumegane Research Institute. Guribori was the technique in which the tsuba makers of the Takahashi School were most skilled. Among them, the carvings by Okitsugu combined both elegance and substance to achieve outstanding solidity. As was shown through the Yoshino River Tsuba in the first chapter of this “Discovering Mokumegane” series, Mokume Gane is not just a technique for making patterns, but was taken to the level of representing images by Okitsugu. One can confidently say that he was also unsurpassed as an expert in crafting guribori. 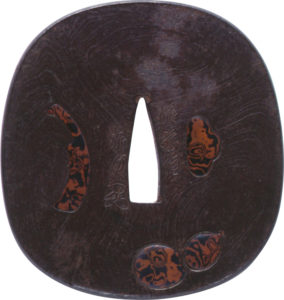 n the Mokume Gane tsuba, a simple iron substrate has been inlayed with Mokume Gane. Aside from the hitsuana which is the hole through which the Kôgai (the tool that was used for fixing hair) was passed, there is Mokume Gane inlay of a gourd and another, indistinct, long shape. These scattered little accents find a balance in the midst of the large tsuba. With the reverse side of this fun shape featuring a very intricate and challenging Mokume Gane pattern, this item conveys the sense of humor of the craftsmen of the time.

In addition the set of ornaments on the black scabbards for large and small swords that were displayed in the middle, with deep guribori fuchi and kurigata, were doubtless on display to show the quality of the design brought out on the elegantly simple black lacquer finish.

Close-up of large and small swords

And in the corner displaying handicrafts from the end of the Bakufu period, there was a gorgeous Mokume Gane vase.

The Textbook of Mokume Gane features a picture of this vase that was provided by the V&A, but it only shows one side of it. On the occasion of this visit, we were able to see the other side at last!

It is a beautiful piece which harmoniously combines highly decorative ornaments in cloisonné, lacquer, mother of pearl and gold inlay, with a Mokume Gane pattern.

As this is a collection which brings together pieces from all over the world from the perspective of  decorative arts and design, each and every piece on display in the “Japan” room is exquisite and finely decorated, and one can go on admiring them without ever tiring of them. (Japan room inro)

Looking at sword tsuba, the proportion of pieces made of Mokume Gane within the framework of everything produced by metal craftsmen at the time was very small, but they are featured in the V&A’s display. This helped us realize once again that this is due to their assessment of the beauty and depth that can be seen in the Mokume Gane techniques.