Mokume Gane evolved as one of the techiques in manufacturing tsuba for swords. At Mokumeganeya, we also produce tsuba jewelry that is inspired from the shape of these original sword tsuba. Particularly popular is the tsuba jewelry inspired by the gorgeous ornamentation on the tsuba from the Shôami school.

This chapter will focus on those tsuba as a way of introducing Shôami Denbei, the creator of Mokume Gane, as well as Akita Mokume Gane. 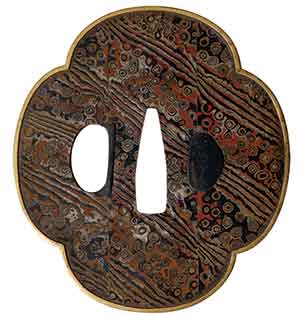 The tsuba shown here features a four-sided shape known as “Yotsu Mokko” which was quite popular as a tsuba shape during the Edo period. It is reminiscent of a cross –section of a melon with its myriad seeds, it was used as an auspicious shape tied to bountiful progeny. The Mokume Gane pattern, made of gold, silver, shakudo and copper is outstanding in its design. The color combination, coupled with the gold brim, is gorgeous, making it an unusual piece in Mokume Gane where the effect is generally more sober. The design which combines round Mokume Gane spheres within the stripe pattern was achieved using the same methods as for the kozuka (handle fitting for the small sword worn along with the large sword) which is said to be the oldest example of Mokume Gane.

The origin of the name “Shôami” lies in the school’s origins in a famous Kyoto family of metalworkers which spread all over Japan during the Edo period. Denbei apprenticed with Shôami in Edo and, after finishing his training, he was employed by the Satake Clan in Akita where he produced numerous outstanding sword fittings. He then founded the Akita Shôami school. Even though the Shôami school expanded widely to Shônai, Aizu, Edo, Bizen, Iyo and Awa, it was the Akita school which prospered most with its new techniques of guribori and Mokume Gane.

Producing the tsuba that is shown here required a pretty large metal base, and the technique to fuse the four different layers of metal without them melting into one another required great skill. Going on to combine three Mokume Gane billets was also a challenging technique yielding an even more intricate pattern. This particular type of gorgeous Mokume Gane that uses a base combining gold, silver, shakudo and copper is categorized as “Akita Mokume Gane” and there are no other cases of a similarly skillful technique and refined elegance.

This tsuba is also featured on the Mokumeganeya website.