The patterns of Mokume Gane are created by carving and twisting layers of metal. Because it is hand-made by craftsmen and the same patterns cannot be reproduced, each and every product can be described as unique. In this chapter, we will look at the specifics of individual pattern categories.

To start with is the Mokume Gane of the Akita Shôami school, the creators of Mokume Gane. Its particularity is the combination of diagonal stripy patterns that seem to be flowing with rounded burl-like patterns in colorful combinations of gold, silver, copper and shakudo.

The ingenious combination of carving and twisting produced patterns that made for the highly skilled early Mokume Gane.

Patterns created by Shôami Denbei are also being used in Mokume Gane jewelry and are very popular. 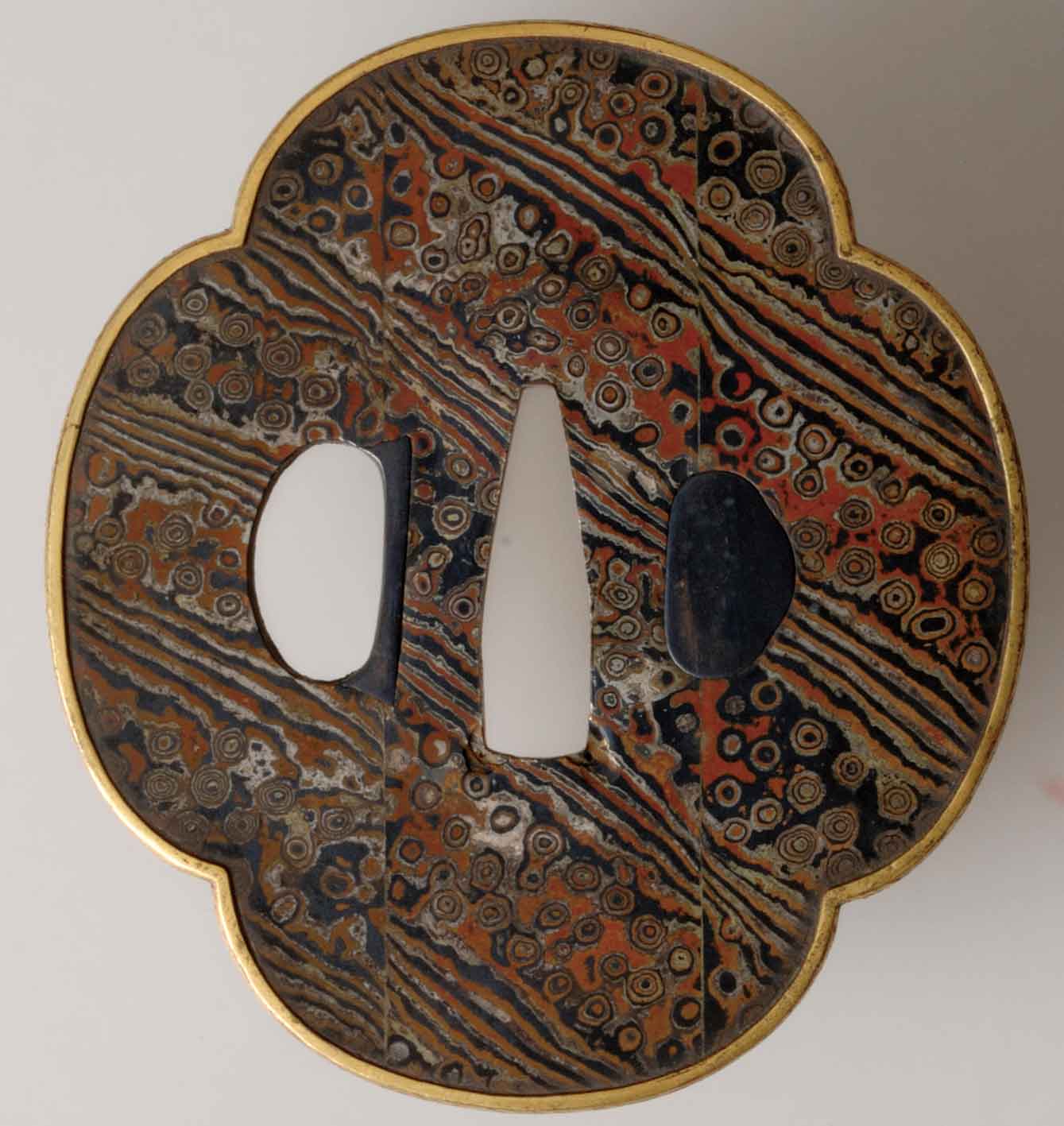 This is the kind of pattern most commonly seen in the Mokume Gane tsuba of the Edo period that are still in existence.

An intricate and elegant pattern was created by randomly hammering down the metal layers to flatten them. 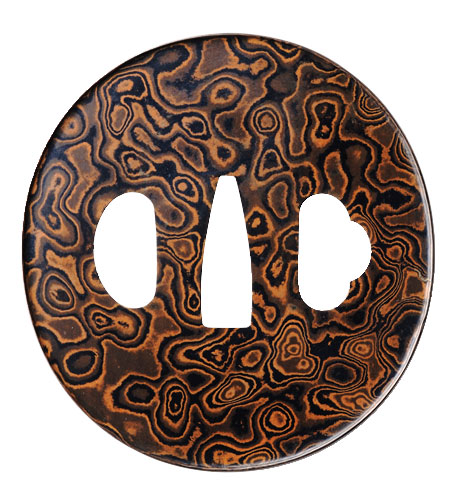 The characteristic of the Mokume Gane made in the latter part of the Edo period by Tsunetada who lived in Bushu Kawagoe (the modern-day town of Kawagoe) was the Tamamoku pattern. Tamamoku refers to the burl pattern in wood and is a highly prized, beautiful pattern, developing layers of concentric swirls. The Tamamoku effect is achieved by carving the layers of differently colored metals into a circular shape which is then flattened. Tsunetada covered the entire surface of different-sized tsuba with Tamamoku, creating vibrant patterns. 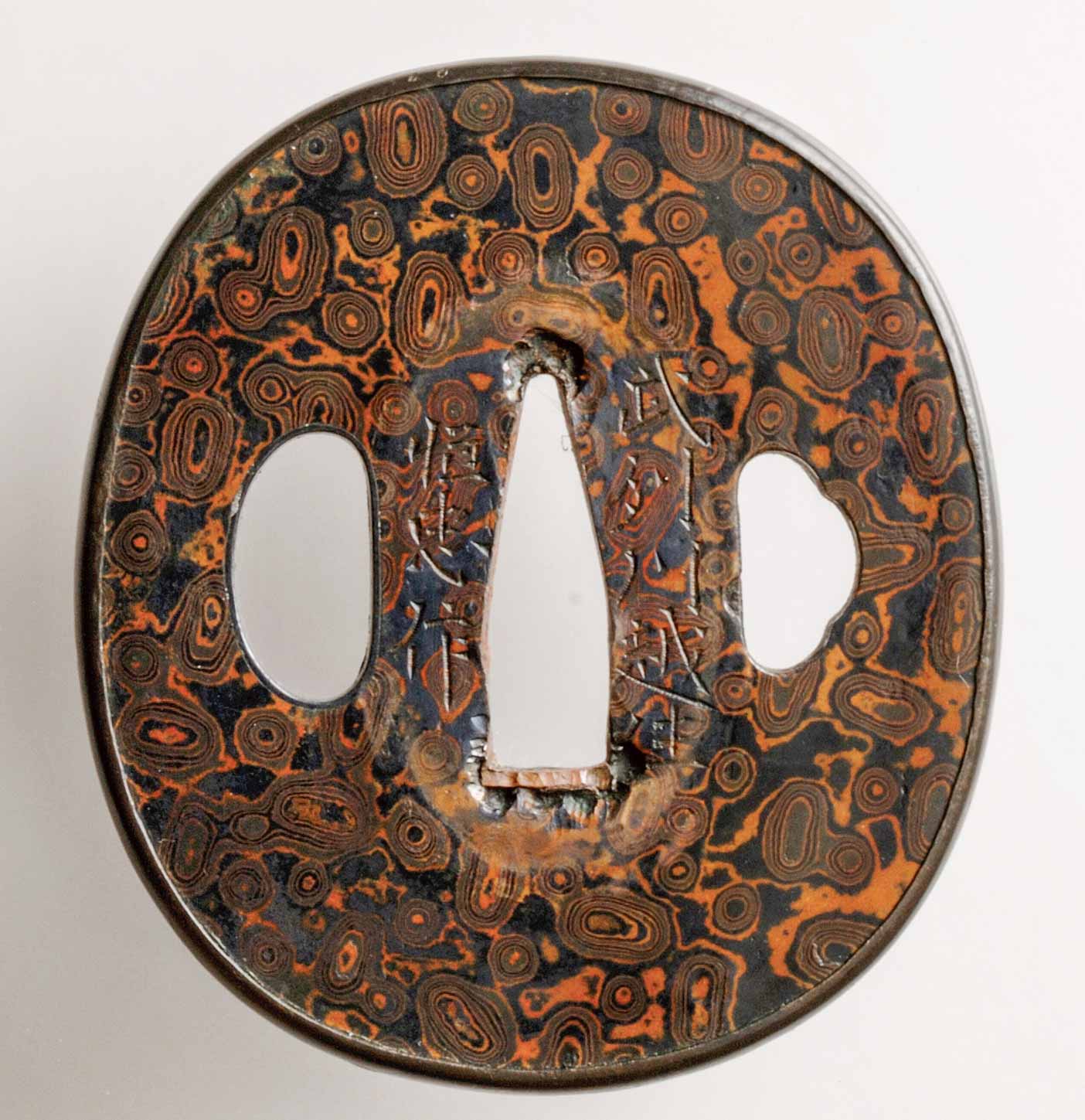 In the case of Takahashi Okitsugu who worked in Edo, his uniqueness lay in his ability to represent realistic artistic landscapes in which even the passing of time could be felt within the small surface of a tsuba. He actually showed cherry blossoms and red maple leaves floating in a river. He was the one who took Mokume Gane from a technique to create patterns to one that could represent actual images. 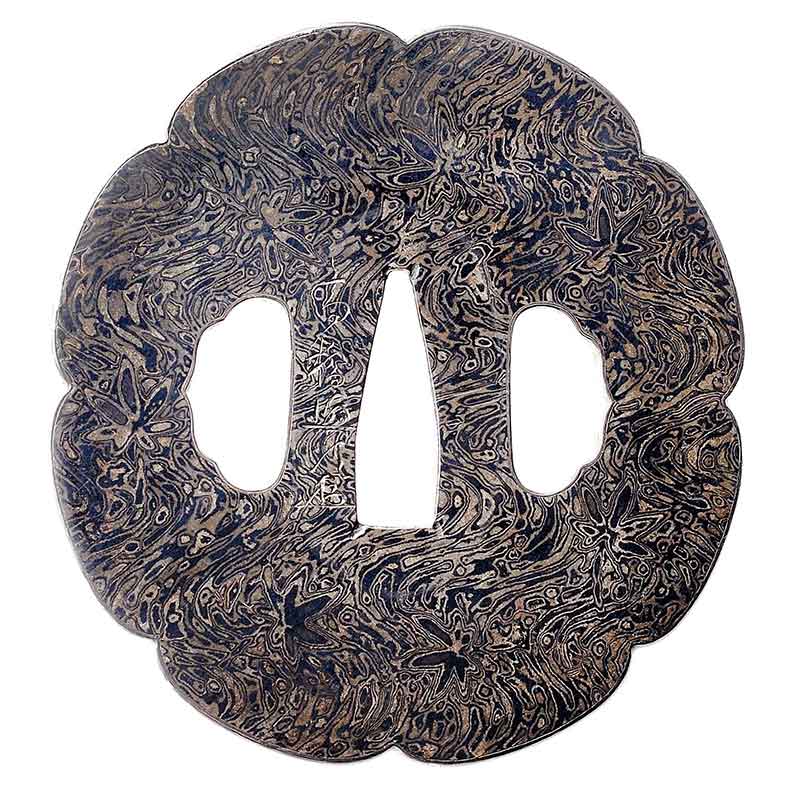 This distinctive pattern by Okitsugu came to be used in the Mokume Gane tsuba seen in the latter part of the Edo period. The irregular superimposition of carved fine, vertical stripes resulted in a regular pattern, making Mokume Gane technique entirely into a technique for patterns. 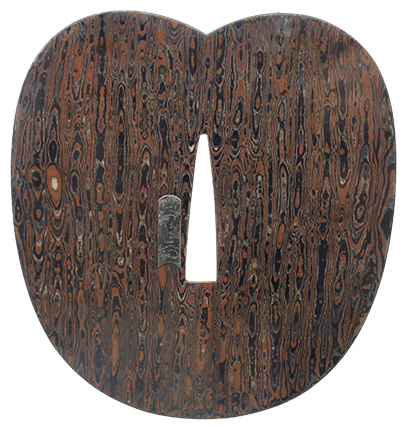 We will conclude by introducing a very important Mokume Gane pattern.

The Shôami school spread and was active nationwide, and among these, Shôami Morikuni, a tsuba manufacturer of Iyo (the current Ehime Prefecture) left a rare square crest pattern for posterity. The pattern was achieved in the standard Tamamoku manufacturing method by carving down layered metal, but the surface of the tsuba is covered irregularly with both large and small square shaped crest patterns, giving a bold and virile impression. This is a very particular pattern of which there are no other examples. 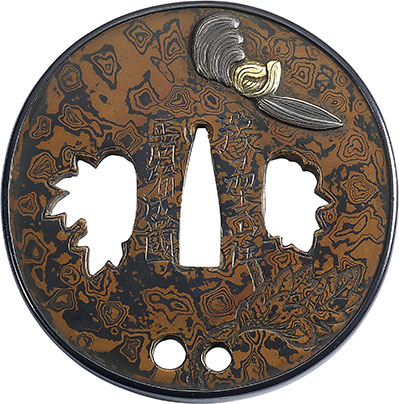 It is said that Mokume Gane patterns are born of the conversation between the craftsman and the metal. Each and every pattern that is born of the combination of the intention of the maker and randomness is unique in the world.