In Boston, in the United States, the Boston Museum of Fine Arts is famous for its collection of Far Eastern art.

Boston is known as a trading port and has long engaged in trade with Asia, so the Boston Museum of Fine Arts placed an emphasis on collecting arts from various Asian countries early on.

During the Meiji Era, OKAKURA Tenshin (1862-1913) was invited to serve as curator of Far Eastern Art at the Boston Museum of Fine Arts, and he collected a substantial number of Japanese masterpieces. OKAKURA Tenshin had worked on the establishment the Tokyo Fine Arts School (subsequently called the Tokyo University of the Arts), and he founded the Nihon Bijutsuin (Japan Art Academy), making a major contribution to the world of early modern Japanese art. He also endeavored to make Japanese culture known overseas. As assistant to Ernest Fenollosa (1853-1908), he helped him in his purchases of art.

During the Meiji Era, in addition to Fenollosa, other Americans such as William Sturgis Bigelow (1850-1926) were also captivated by Japan, and they studied Japanese art and culture, taking many works of art back home with them, subsequently donating these to the Boston Museum of Fine Arts.

The Boston Museum of Fine Arts has an enormous number of important pieces from Japan. For example, in 1986, 514 woodblock printing blocks (the blocks that were carved and then used for making the prints) were re-discovered, including those for Katsushika Hokusai’s illustrated trilogy. 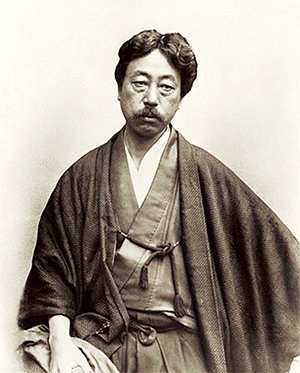 The Yoshino River Tsuba of made by TAKAHASHI Okitsugu during the Edo Period, and which represents the culmination of the art of Mokume Gane, is also part of this collection.

We would like to talk here about the connection between this work and Mokumeganeya.

While strolling through antique fairs and shops in search of Mokume Gane works, TAKAHASHI Masaki, founder of Mokumeganeya, came across the “Tatsuta River Tsuba” (photo above) which turned out to be the work of the famous craftsman TAKAHASHI Okitsugu of the Edo Period.

For Takahashi, this was the encounter that prompted him to embark on a lifelong quest for Mokume Gane which had been called the “phantom technique.”

This piece made of Mokume Gane which could show the shape of red maple leaves within its beautiful streamlined pattern.

They are widely used in Japanese crafts as traditional Japanese designs.

And it seemed only natural that there would be a counterpart tsuba to the one that was obtained by TAKAHASHI.

This counterpart, the “Yoshino River Tsuba” was across the ocean, at the Boston Museum of Fine arts.

Having obtained the Tatsuta River tsuba and spent some time studying it, Takahashi and another Mokumeganeya employee finally traveled to Boston in January 2006 to investigate the Yoshino River tsuba at the Boston Museum of Fine Arts.

During the Edo period, TAKAHASHI Okitsugu made the two tsuba at the same time and he doubtless looked at the two of them together.

So, the next step was for TAKAHASHI to hold in his hands these two tsuba which had been through various owners and ended up for 100 years in Japan and America.

Joe Earle who was Chair of the Department of Art of Asia, Oceania, and Africa, gave us every assistance on-site.

The Boston Museum of Fine Arts also has other Mokume Gane and Guribori tsuba in its collection, and we were able to study all of them in the study room that was allocated to us.

Based on the study results from that trip, a reproduction study was undertaken on our return of the Yoshino River tsuba, and the results of these more thorough studies are also laid out in details in TAKAHASHI’s doctoral thesis on “The Decorative Possibilities of Mokume Gane jewelry.”

In the second part of this essay, there will be a detailed outline of the reproduction process.