We can engrave your favorite designs inside of your engagement ring and wedding bands.
Please freely let us know your family crests, marks, and messages you would like to engrave on your rings. 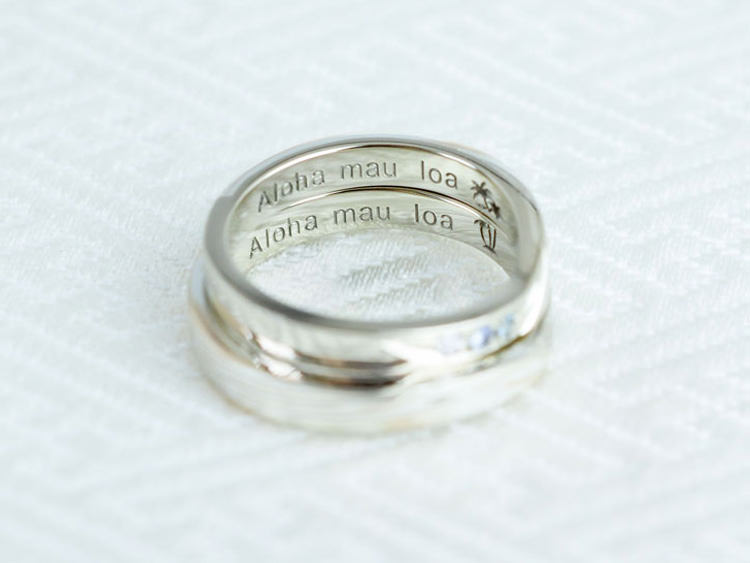 Standard mark engravings
You can choose your favorite marks from 53 kinds of our standard marks. 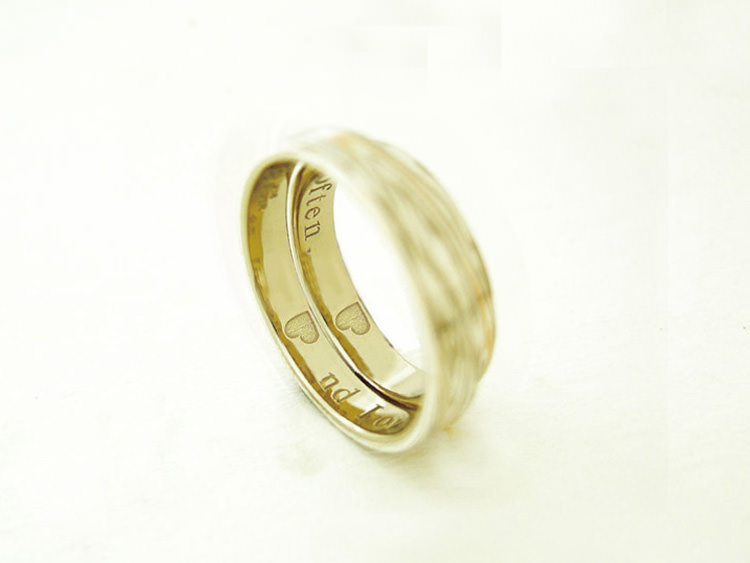 Family crest engravings
This is one of the most popular engravings at MOKUMEGANEYA. In Japanese culture, each family has its own emblem to identify. It is close to the badges and coasts of arms in European heraldic tradition. You can deepen the relationship between your families to add both of your family crests inside of your wedding bands. 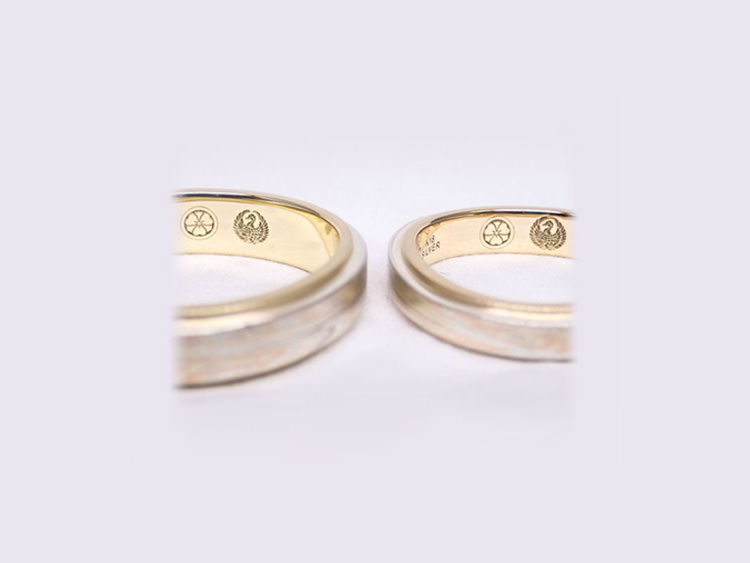 Customized mark engravings
We engrave the mark you drew or your specified marks. When they are combined with inside stones, you can enjoy your original designs inside of your rings in addition to the outside designs!!
*We cannot engrave the marks with copyrights. 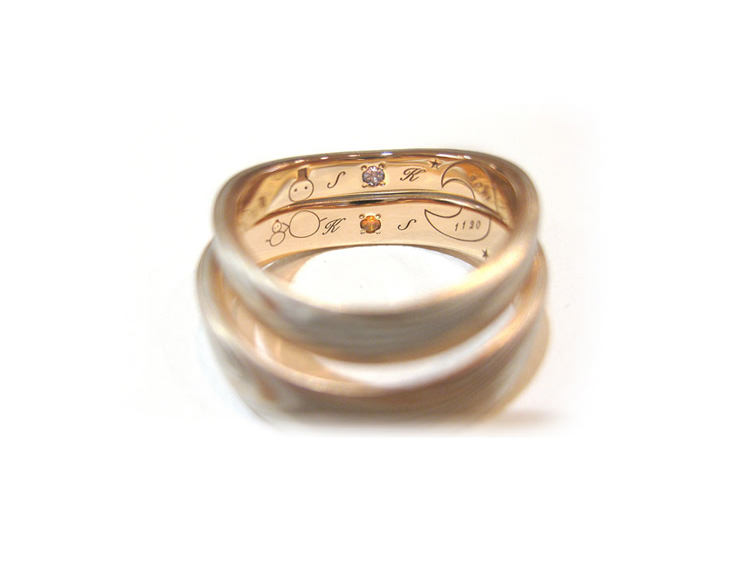 Paired mark
We can divide a standard mark, a customized mark, or a family crest into two and engrave each part into two of your rings.

Episode 1.
This rice ball mark has the meaning of peacefully and happily sharing both good things and bad things. The clients chose this mark because they loved to eat. 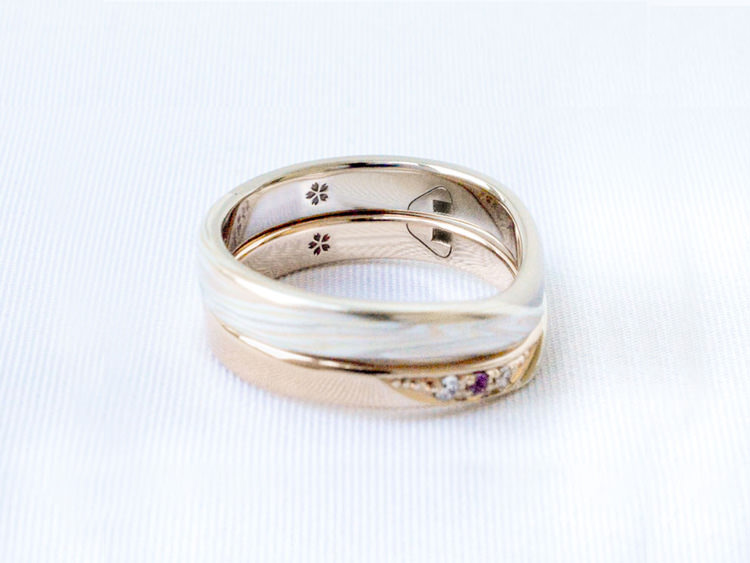 Episode 2.
The clients bounced some ideas off each other and came up with this mark. They wanted the mark which had the image of the two rings’ linking. The initial letters of their names and the inside stones became good spices with the mark and made a beautiful decoration that only they can secretly enjoy.

Episode 3.
The mark represents the 108 roses that the client gave his wife when he proposed her. The mark was designed as close to the actual rose he gave her as possible. 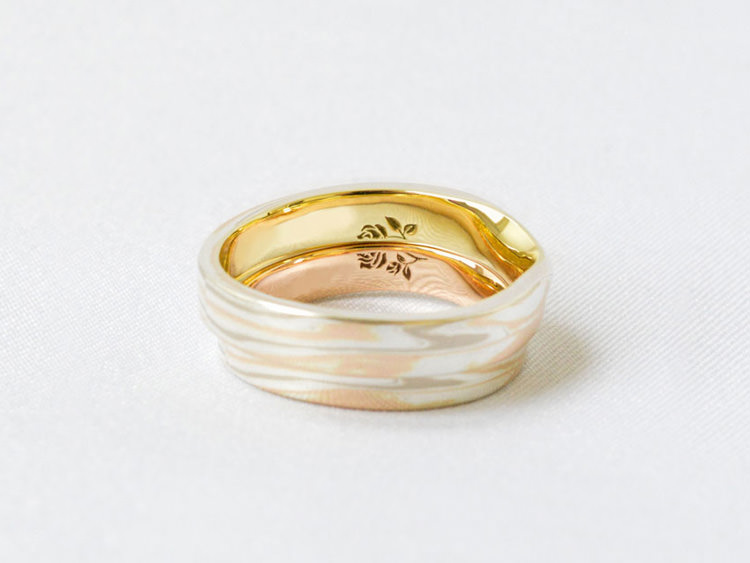 Episode 4.
The family crest of the husband was engraved into the rings. When two rings are together, the mark is completed. The design must deepen the relationship between two of the customers. 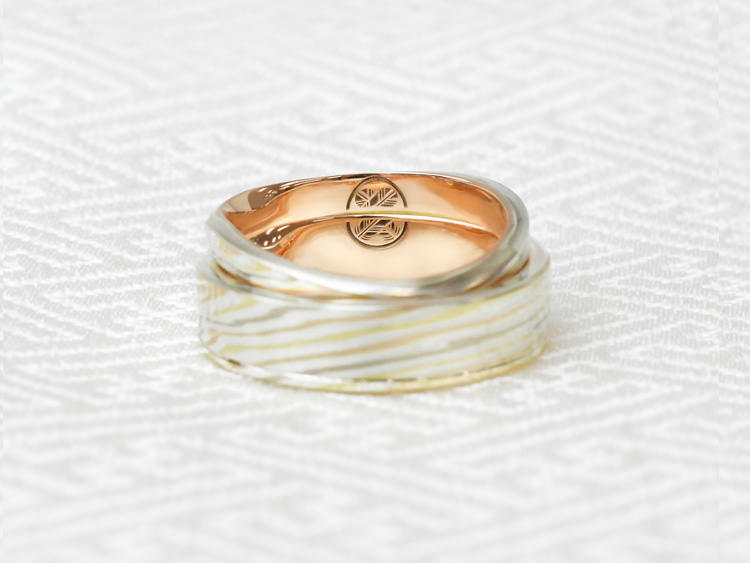 Episode 5.
Both of the customers were born in April. That is the reason they chose cherry blossom marks. It is wonderful when two marks get together, they look like heart shapes ♡. 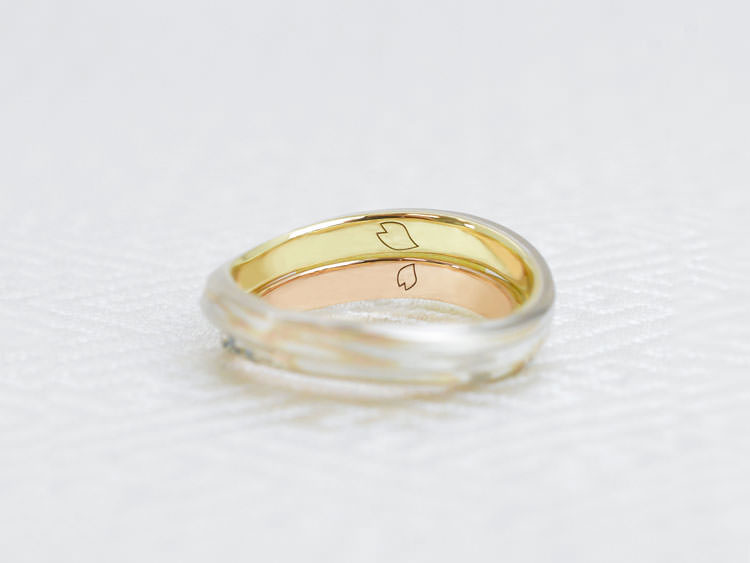 Episode 6.
Both initials of the customers’ names are “R” and they feel destiny because not many people have “R” for their initials. That is why they chose this engraving for their wedding bands. Also, they made it a paired mark to feel stronger bond between them.

Episode 7.
The engravings start with a clover mark and the initials of the customers’ names follow the mark. It is to be able to add their children’s names to the rings in the future. This engraving has their wish for everlasting happiness. 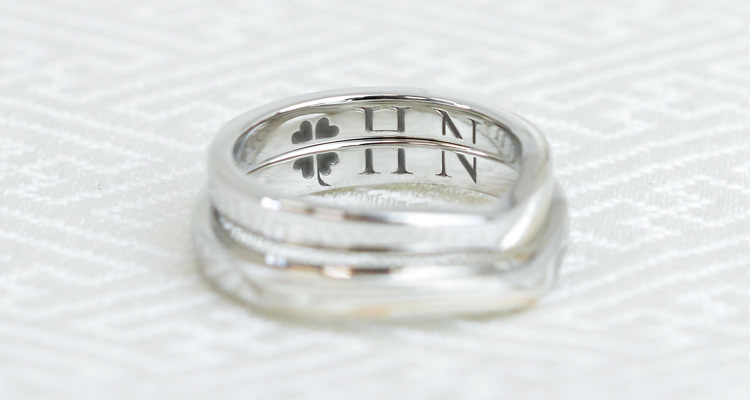 Episode 8.
The customers had a friend who was a designer and the friend designed the engraving mark for their wedding bands. The completed mark has the initials of their names in a heart mark as they asked for a cute and round image. 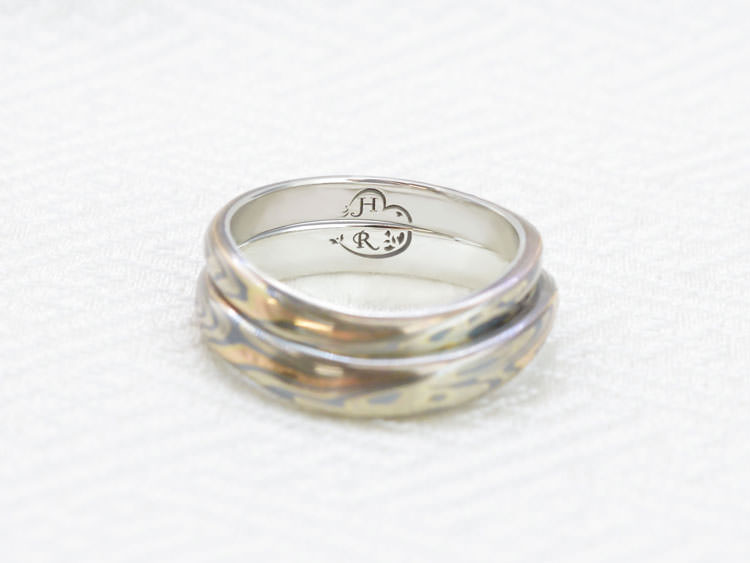 Episode 9.
The couple has the same hobby, so they expressed the image of their hobby on the mark. They focused on the letter font and so on and the engravings are stylishly completed. 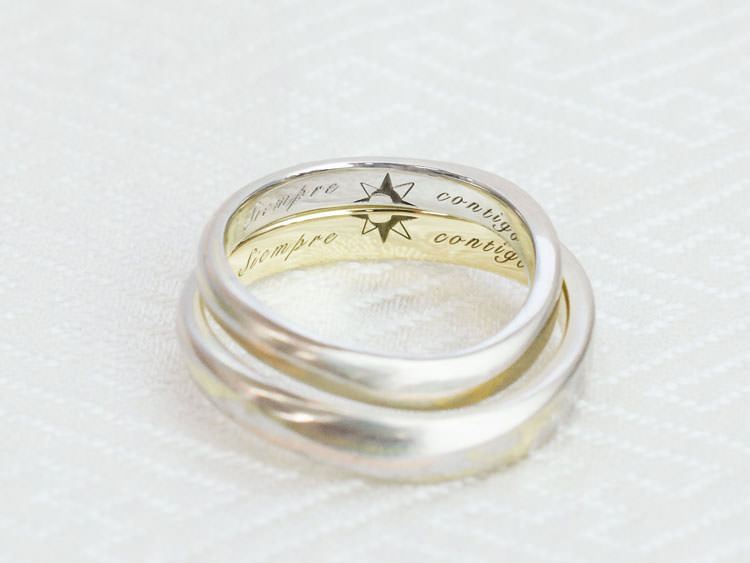 Episode 10.
T is the initial of the couple’s names, and the angel’s wings are images of their child. The marks are positioned as if they enfold their child. Also, the tanzanite is their child’s birthstone. The meaning of this engraving is “protect our child.”

Episode 11.
Because they are Japanese style rings, the customer wanted to match the inside engravings of the wedding rings with Japanese like and created the engraving design with her husband. The image of Orihime and Hikoboshi on the Milky Way is romantically designed. They secretly express their feelings inside of their rings. 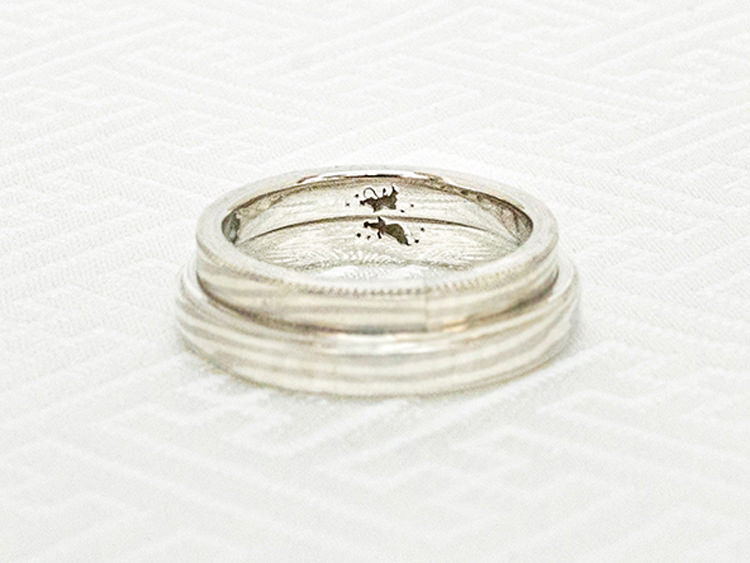 Episode 12.
This is an engraving that the cherry blossom mark appears when two rings get together. “At the first glance, I thought it was pretty with my intuition, and I thought it was good that I could feel the bond between two of us in terms of two becoming one.” This is the reason why they chose this mark. Even inside of the rings, metal and engraving are shared and you can feel their bond. 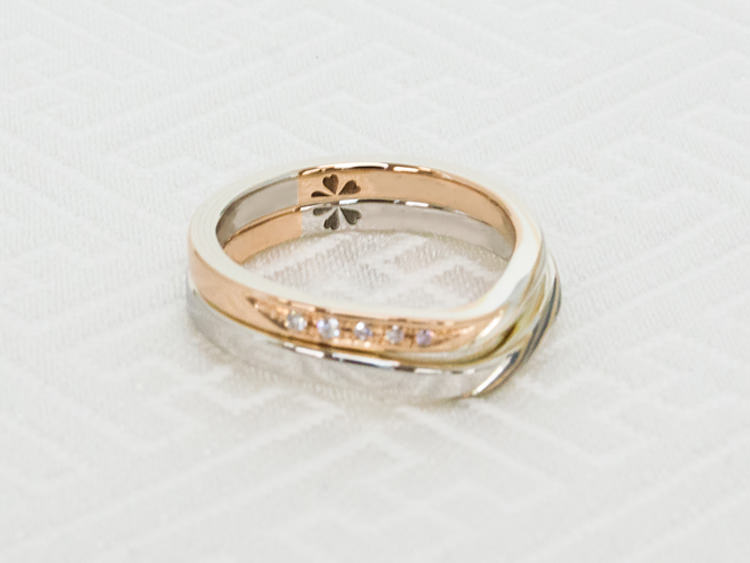 Episode 13.
They chose this engraving design because they thought it was very unusual that family crests and paired marks can be engraved on the wedding rings. Their family crest appears by stacking their rings and became an engraving design that you can feel their deep relationship well.

Episode 14.
This mark was created from an imaginary pair of male and female birds each with one eye and one wing and always flying together. The two people attach great importance to the meaning of the marital vows, so the birds were used as a motif and combine the characters and date. It is an engraving design that reflects their intimate relationship. 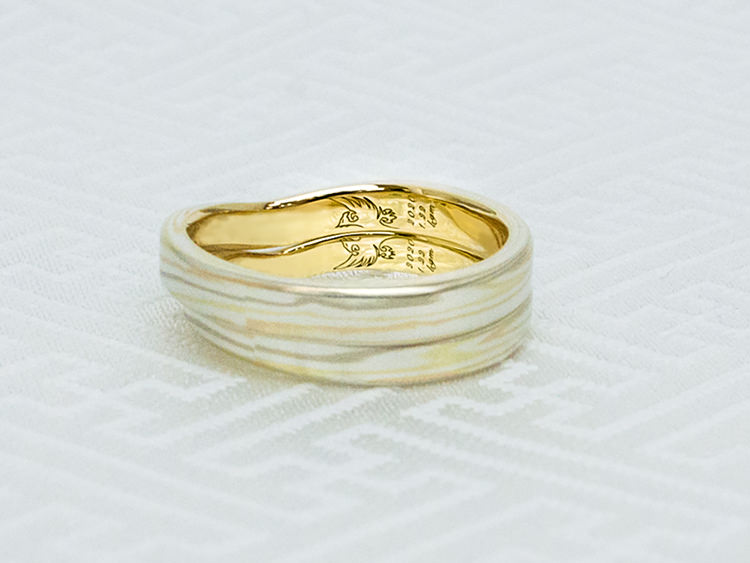 Limited Free Paired Mark Promotion
We are having a limited promotion of a free paired mark.
If you make an appointment online and then purchase our rings, you can choose one free paired mark from 7 of our most popular paired marks.
*Please note that the promotion may end without any notice.